Movies: A Beautiful Day in the Neighborhood

It's no wonder two films about Fred Rogers have come out over the past couple years. In these deeply troubling times where anger and fear have sucked in even the gentlest souls, we are collectively aching for a person who represents something even greater and more profound than the life he lived.

Fred Rogers, it has been said, was no saint. But goddamn if he wasn't close. The Presbyterian minister-turned children's television host seemed to be equal parts therapist, artist, pastor, and social worker. His goal on Mister Rogers' Neighborhood was to help children manage their emotions in healthy ways. To do this, he listened to children and cared about what they cared about. He validated all their emotions and explained techniques to express those emotions outwardly without hurting others.

After we saw A Beautiful Day in the Neighborhood, my friend and I discussed the similarities in how Rogers lived his life and Buddhist practice. Fred Rogers prayed and meditated daily, he swam laps, he wrote letters to people. He wasn't naturally just a good person--he practiced at being kind. That's the key term: practice. Much like there is a difference between taking a yoga class and having a yoga practice, there is a difference between a random act of kindness and having a kindness practice.

But, ironically, Beautiful Day isn't actually about Fred Rogers--it's about Lloyd Vogel (Matthew Rhys), a writer for Esquire magazine whose boss charges him with writing a piece on Fred Rogers for the "Heroes" issue. Vogel finds this absurd since he considers himself both a hard-hitting investigative journalist and also a cranky cynic. Turns out, he needs this assignment very much.

Estranged from his father, Jerry (Chris Cooper), and newly a father himself, Lloyd appears to be on the verge of some kind of breakdown. His anger, cynicism, and coldness have driven him for years--but now his father is trying to get back into his life, and his infant son needs a role model. The angry Lloyd is no longer acceptable. And when he starts talking to Fred Rogers, someone actually listens to him and validates his feelings. 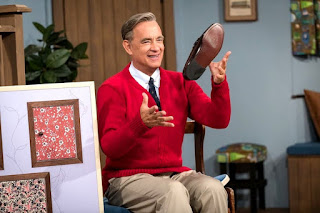 Of course, Rogers is played by perhaps the kindest public figure currently alive, Tom Hanks. Although Hanks eventually blends in to the role of Rogers, you never for one moment forget you're watching Tom Hanks. But maybe it doesn't really matter. In fact, maybe it's fitting that such a beloved actor portrays such a beloved man--it almost feels symbolic and intentional, a double-dose of kindness in one character.

Beautiful Day walks a fine line between genuine and overly sincere, and it doesn't always fall on the right side of the line--but that doesn't take away from the moments of grace than inhabit the film. There's a scene where Rogers asks Lloyd to have a moment of silence with him before a meal, and the scene plays out in real time with Hanks looking into the camera directly for a few moments. The people sitting behind me laughed uncomfortably at this and I wish they hadn't, because as cheesy as it was, it was also effective.

The film, directed by Marielle Heller (a fantastically talented director), is a perfect companion piece to last year's Won't You Be My Neighbor? The latter, a documentary about Rogers' life, is the better film and I legit bawled during it. It's better, in my opinion, because it uses a lot of footage from the show Mister Rogers' Neighborhood which clearly demonstrates Rogers' way of talking with children about everything from disabilities to war. But Beautiful Day expands Fred Rogers' philosophy outward and shows how even the most cynical among us have the ability to soften, to forgive, and to allow ourselves to feel emotions that we so desperately want to avoid. That's another connection between Buddhism and Rogersism: not avoiding emotions like sadness and anger, but actually feeling them. It's terrifying, but it's necessary in order to not let your emotions control you.

I myself have been going through dark times since, hmm, I'd say mid-2016 (I wonder why??), and I fully empathize with Vogel's character (a stand-in for the real writer of the Esquire article, Tom Junod). Not in terms of the exact challenges Vogel faces, but in terms of his bottomless pit of anger. I understand what it is to be angry, because I am often very angry. I'm a bit of an odd duck because I'm also very optimistic, friendly, and emotionally intelligent...except when I'm not, of course. But I think my anger comes from a place of giving a shit--about other people, about myself, and about the world. And when you care, you become vulnerable. And anger feels better than despair.

So what I'm saying is that when I'm not seeking out catharsis in the form of movies like Hereditary and Midsommar, which match my internal scream, I seek out innocence, wholesomeness, and kindness. I seek out warm blankets and my mother's hand tickling my back. I avoid people who match my sarcasm and cynicism and try to find people who encourage my kind side. I seek out movies like this one, because I, like everyone else, need balance and sincerity. Too much sincerity and I roll my eyes, but too little and shrivel in the cold. So wait until a very cold day and go see A Beautiful Day in the Neighborhood, which will warm your soul right up.