Deer In The Headlights

Movies: The Killing of a Sacred Deer

Yorgos Lanthimos' The Killing of a Sacred Deer is the worst movie I've seen in the theatre in 2017. It has some interesting ideas, some ok acting, and some chilling moments, but in general it is painful to watch and--an even bigger sin--boring.

Ironically, Greek director Lanthimos' The Lobster was my favorite movie of 2016. I describe Lanthimos as Wes Anderson's evil twin: his movies have the awkward, drily humorous dialogue and stylized cinematography of a Wes Anderson movie but with more violence and darkness. The Lobster, as well as Lanthimos' first film, Dogtooth, take place in strange and interesting alternative realities. The Killing of a Sacred Deer takes all of it too far, plunging into absurdity and nihilism.

Killing follows the Murphy family: Colin Farrell is Steven Murphy, a cardiac surgeon with a history of alcoholism. Nicole Kidman is his wife, Anna, an ophthalmologist. Raffey Cassidy and Sunny Suljic play Kim and Bob Murphy, Steven's kids. But Steven has another "son" of a sort: Martin, played by Barry Keoghan (who was excellent in a supporting role in Dunkirk earlier this year and is pretty much the only interesting actor in Killing).

Martin is an awkward young man whose father is dead. It's revealed that Martin's father died on the operating table while Steven was performing heart surgery on him. At first, the viewer might think that Steven is trying to make amends and do right by the young man by acting as a father figure--having lunch with Martin and giving him nice gifts. But soon enough, we realize that darker forces are at play. 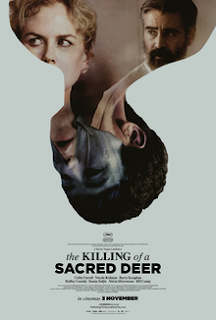 Stop reading if you don't want to see spoilers!

One morning, Bob (Steven's young son) wakes up and can't move his legs. There is nothing physically wrong with him, and yet he is paralyzed from the waist down. Steven thinks his son is faking. But then he meets with Martin who tells him bluntly and completely without passion or anger, that Steven must choose a family member to kill to make him and Martin "even". If he doesn't, all of his family members will, one by one, suffer paralysis, then refusal to eat, and finally bleeding from the eyes followed quickly by death.

There is no scientific or logical explanation for how Martin is meting out this justice. The film's title implies a sort of Native American spirituality--a return to balance after a wrongful death (and we learn that in the case of Martin's father, it was wrongful--Steven drank alcohol before performing the surgery, possibly affecting the outcome). Is Martin a god? A witch? It is never explained, much like how the procedure to transform humans into other animals is never explained in The Lobster.

And that's fine. I have no trouble suspending disbelief. What I didn't like about the film was how relentlessly awkward and weird it was--and I love weird movies! But it was almost like Lanthimos was trolling the audience. I felt like I did when I saw Swiss Army Man--like, "is this a joke?" Creativity and strangeness can be valuable assets to a movie, but only when used intelligently to build a world or to make an important point. The Killing of a Sacred Deer is beyond pointless. I would say that it was "emotional torture porn" except that the only "emotion" I felt was, "why is this movie two fucking hours long? What a goddamn waste of time. When am I going to be able to get dinner?"

My primary emotion while watching this movie was eye-rolling contempt. Honestly, if the movie had been 30 minutes shorter and had more natural dialogue and realistic acting, it could have been a good. That's the most annoying thing--that Lanthimos took an interesting idea and blew it. Instead, we get two solid hours of Colin Farrell playing a man who displays no realistic emotions at the possibility of his wife and kids dying and then fucks around wasting time until the absurd climax that I *think* is supposed to be darkly funny, but was just groan-inducing.

The only good thing I can say about The Killing of a Sacred Deer is that it had potential. Squandered potential, but potential nonetheless. Because Lanthimos has directed some truly excellent films, I will likely keep my eyes open for his next movie, which I hope is better than this one, which was a waste of time and money for both the filmmakers and the audience.