I'm relieved that I waited to watch David Lowery's atmospheric meditation on time, love, and legacy on streaming because goddamn, would it have been anxiety-inducing to watch in theaters--and not because it's scary (it isn't, despite the fact that a ghost is the main character), but because it's very slow, has minimal dialogue, and is just an anti-movie movie. By watching it alone, I was spared that weird feeling I get when I watch an ~**artistic**~ film in theaters, which is: "Does everyone else hate this movie? What's going to happen? Why is Rooney Mara eating a pie for 20 minutes??*"

But because I watched it on my couch, alone, I was able to truly appreciate A Ghost Story for what it is: a meditation, as I call it above. It's meant to provoke thoughts and feelings more than to entertain.

Shot in an aspect ratio of 1.33:1, A Ghost Story looks and feels stripped down and simultaneously empty and expansive, which makes sense given that, to me, it is a film about the vastness and elliptical nature of time. A man (Casey Affleck) and a woman (Rooney Mara) live together. They argue about whether or not to move out of their modest home (she wants to, he doesn't). The man is killed in a car accident and "wakes up" in the hospital as a ghost. For the rest of the movie, Affleck wanders around covered in a sheet with two eye holes, much like the ghost costume I made in fourth grade for Halloween. And while the image of ghost that looks like something straight out of Looney Tunes might invite mockery, I understand why Lowery chose to cover Affleck in a sheet for 80% of the movie--it makes him both impossible to ignore, as he stands in the background, watching his girlfriend move on with her life, but also easy to project your own thoughts and emotions onto. It removes the "acting" part of an actor. The ghost is both there and not there, as a real ghost would be. Present, but invisible. 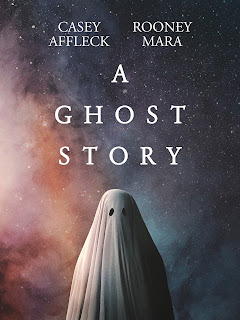 The ghost watches his girlfriend mourn and then move on and, eventually, move out. A new family arrives and the ghost terrorizes them by throwing plates against a wall. Then there's a party, where a guest (played by Bonnie Prince Billy, of all people) has a monologue about how trying to create a legacy, whether you do it by having kids or by writing a symphony, is pointless because everyone dies and, eventually, the universe will die. It was a little on the nose, but I actually enjoyed the scene a lot. Probably because I agree with the overarching idea that time erases all things and all that really matters is the present moment, which we need to be present for, fully, before it slips away.

The ghost observes his own house bulldozed, and then watches as a skyscraper is built. He eventually "commits suicide" by jumping off the building and lands in the same location, only in the 19th century. He observes as a family of pioneers prepare to build a home, only to be killed by Native Americans. Finally, he ends up back in his original home, watching his own living self with his girlfriend, before he is finally able to move on and disappear into nothingness.

If all that sounds like a pretentious load of garbage, well, you wouldn't be alone in your opinion. You need to be in the right frame of mind to appreciate this film and you also need to be open to its thesis which--again, this is my interpretation--is that what matters in life is the love we can give one another (and to ourselves) in the limited days and years we have. The scene with the pioneer family really hit this idea home for me: one minute they're discussing their plans to build a house, the next minute they're all dead--including the children. There are many scenes in A Ghost Story that play with time. For example, when the girlfriend brings home a date (presumably some months or years after the man's death), the ghost becomes upset, making the lights flicker and causing books to fly off a bookshelf...but when the woman goes to retrieve the books, she's wearing a different outfit. Or the ghost will walk through an empty house and into a room...where a party is taking place. I thought about Slaughterhouse-Five as I watched this movie: "Billy Pilgrim has come unstuck in time." The ghost, through death, is no longer traveling on a linear time line...although he does appear to be stuck in one location.

I really liked A Ghost Story. It truly made me think about the nature of time and how even if you don't believe in ghosts, our ancestors and loved ones who have died have a way of sticking around--if only in our memories. Director David Lowery took a lot of risks in making this film, and I think it paid off. It's a beautiful, contemplative film that will leave you with a lot to consider.

*j/k, the pie-eating scene is actually only 4 minutes long.
Posted by Damn Good Coffee at 12:46 PM No comments:

Lambs to the Slaughter

I don't go camping. Not only do I have no desire to be a sweaty mess for days on end with only baby wipes to clean my smelly bits and have to poo in the woods, I also don't go camping for a simple reason: camping is fucking terrifying.

Think of all the movies where camping leads to certain (sometimes supernatural) death: The Blair Witch Project, Into the Wild, Deliverance, Wolf Creek, Friday the 13th...the list goes on and on. Just read this creepy-ass story that was one of Jezebel's best true horror stories of the year last Halloween: It's called "Footprints in the Snow" and it's the 6th story down.

So it's no surprise that one of the scariest books I've read literally ever takes place in the woods, when a group of college buddies tries to take a "short cut" on a hiking trip in Sweden and end up cutting their lives short. That book is The Ritual by British author Adam Nevill and it is ball-retractingly scary. 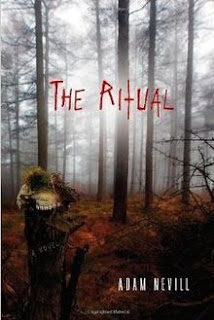 Following a group of four friends in their thirties, the first half of the book follows a familiar plot line: while on a short hiking holiday in Sweden, they attempt to find a quicker route to their destination by cutting directly through some deep, dark woods instead of going around. Things go sideways when they stumble across a gutted elk strung up in a tree with fresh blood dripping off of it. It's not the fact of a dead animal that freaks them out, it's how it's displayed. This is not the work of a hungry bear, but someone--or something--with malicious intent.

It gets worse with the gang gets caught in a downpour after dark and happen upon a tiny, boarded up house. They decide to break in and make camp for the night in the house--only to find freaky-ass pagan shit all over the place, including a bizarre statue-like thing in the upstairs part of the house made from sticks and deer antlers. After a night of horrific nightmares, they set out and promptly get lost, run out of food, and come to the realization that something is hunting them.

The group is made up of alpha male Hutch, overweight and whiny Dom, slightly less overweight and slightly less whiny Phil, and narrator Luke. The dynamic among the men ramps up the tension, especially when they start arguing over how to get out of the predicament and whose fault it is that they're lost.

The novel takes a sharp turn halfway through and it is such a curveball that some reviewers have complained that The Ritual almost feels like two books stitched together. But I actually enjoyed both halves, different as they were. I won't reveal what happens in the second half of the book, but I will say that although the second half is less viscerally terrifying, it maintained a sense of desperation and spookiness. Overall, I thought The Ritual was great. It's rare to feel scared while reading a book, so I have to give Nevill a hand--his ability to spin a spooky yarn is excellent.

So you can imagine my delight when I read that the novel was going to be adapted into a film. The sophomore effort of director David Bruckner (his last film was The Signal), The Ritual stars Rafe Spall as Luke, Robert James-Collier (best known as Thomas Barrow on Downton Abbey) as Hutch, Arsher Ali as Phil, and Sam Troughton as Dom.

That the film was released through Netflix, as opposed to a theatrical release, may have been a clue that it was going to be "meh", and while it is MUCH weaker than the book, it's still pretty entertaining. Significant changes were made to the plot. For example, much less time is spent on the events of the second half of the novel, making the last 40 minutes feel rushed and a bit confusing for people who haven't read the book first. The movie is only 1.5 hours--I think the could have easily added 15 minutes and explained/fleshed out the second half more. 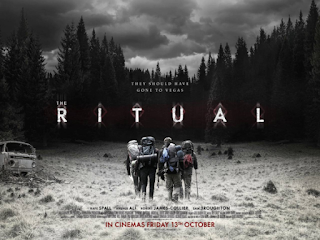 Also, they added a backstory in which there is a fifth friend--Robert--who is killed during a liquor store robbery. Luke was with him, but was too cowardly to step in and protect his friend when the robbers begin threatening Robert. This backstory serves as both an explanation for the hiking trip (Robert is the one who suggested it, so they carry the trip out in his honor) and also a glimpse into Luke's psyche--he is ashamed at his cowardice and haunted by PTSD-like flashbacks during the entire trip. While the backstory is interesting, I don't think it added that much to the movie. I think it would have been better if the director had focused more on atmosphere-building.

Ok, but is the movie scary? Kind of. When the thing hunting the men is revealed (the movie teases, showing only brief glimpses until near the end), it is legitimately freaky. The scene in the abandoned house that gives everyone nightmares is also very effective and creepy. But overall, it's not even close to the level of dread the book was able to get to. The acting is ok, not amazing. The scenery is ok. Everything about The Ritual (the film) is ok--good for a rainy night in, but not rewatchable.

If you're looking to have the bejesus scared out of you, Adam Nevill's book is the way to go.

The Ritual film--Grade: C+
Posted by Damn Good Coffee at 1:12 PM No comments: