Man, I really wanted to like this one. The concept of a 10 year old German boy who wants to be an upstanding member of the Hitler youth during the final days of the Third Reich and whose imaginary friend is der Fuhrer himself, played with childlike whimsy by Taika Waititi (who also directed the film), sounds like it could be delightfully edgy and satirical in the tradition of Chaplin's The Great Dictator and Brooks' The Producers. Alas, Jojo Rabbit doesn't know what it wants to be. It's both not edgy enough and too dark at the same time. It's both too saccharine to be about as serious a subject as Nazi Germany and too upsetting to commit fully to its heartwarming anti-hate message. It tries to be everything to everyone and ends up being nothing to no one.

The opening sequence of Jojo is by far the strongest part of the film: young Jojo is putting on his Hitler youth attire with pride while Waititi-as-Adolf psyches him up, encouraging him to "Heil me! You can heil better than that!" leading Jojo to run through the streets screaming "Heil Hitler" with the exuberance only a 10 year old can muster. He then goes to a training camp where Sam Rockwell (a highlight of the movie) plays Captain Klenzendorf, a one-eyed, heavy-drinking former soldier who has been demoted to training children and couldn't give a fuck. Rebel Wilson and Alfie Allen play Captain K's lackeys.

The training camp part of the film was genuinely funny--imagine Wes Anderson's Moonrise Kingdom but with children burning books, playing with grenades, and learning that Jews have scales and forked tongues. Now, I know this might sound incredibly disgusting and upsetting, but I hope if you choose to see this movie you understand that Waititi is *mocking* Nazis, not endorsing them. I mean, it's pretty fucking clear, but if you don't find Nazis and Hitler funny at all, you'd best skip this film. 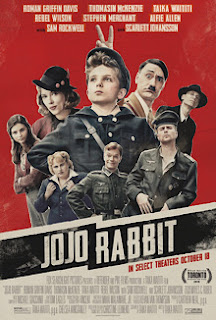 The clearly satirical portions of the film are the strongest...but instead of sticking to straightforward comedy, Waititi introduces drama in the form of a Jewish girl living in Jojo's attic. Turns out, Jojo's mom, Rosie (Scarlett Johansson, whom I've decided I don't like), is part of the resistance. As Jojo begins to develop a friendship with Elsa (played by Thomasin McKenzie) he--get this--realizes that Jews are people too.

Here's my issue with Jojo Rabbit: I didn't buy the sweet, maudlin aspects of the film. There are a ton of scenes with Jojo and his mama, just playing and dancing and being sweet. It didn't match the earlier scenes in the movie. And then, partway through, there is a twist that is absolutely devastating and just seemed really fucking out of place. The tone is all over the goddamn place: Is this movie Life is Beautiful? Is it Inglourious Basterds? PLEASE TELL ME WHAT THE FUCK THIS MOVIE IS?!

I can tell you that Jojo Rabbit's greatest sin is that for long lengths of the film, it is simply boring. There are entire portions that go by with no jokes, or really terrible jokes. There are also weirdly lazy stereotypes. For example, it is heavily suggested that Captain K. and Alfie Allen's Finkel are gay (the gay Nazi stereotype is as old as, well, the original Nazi party). So many talents are wasted here. Rebel Wilson is reduced to a fat fraulein role. There's honestly not nearly enough of Waititi's imaginary Hitler.

However, I do appreciate that Waititi took a chance on a project that is unusual and risky. I personally feel that he did not hit the mark, but the thing about Jojo Rabbit is that a lot of people *love* it. You might be one of those people! I'm glad I saw it because I didn't know which side I'd fall on and now I know.

So I'm going to give Jojo Rabbit a solid, semi-respectable C grade. It has its moments. Overall, I didn't like it that much and would not watch again, but I can see how others would enjoy the film more than me.