This Hulu original mini-series is about the fight to ratify the Equal Rights Amendment and the women involved on both the pro- and anti- side. In particular, the series, which spans the 1970s, focuses on Phyllis Schlafly, the conservative homemaker/lawyer/political wonk who fought viciously to stop the ERA from being ratified--and succeeded.

Cate Blanchett plays Schlafly to perfection. She perfectly captures Schlafly's mannerisms and her charisma. Schlafly was a hateful person, yet undeniably intelligent. She was also a person into "alternative facts" long before Trump was elected (her final book, published right before her death, is titled The Conservative Case for Trump). The series portrays Schlafly as a woman who wanted it both ways: she wanted power, influence, and to be acknowledged publicly for her work, while also fighting against women's equality in the political, economic, and social spheres. If you're a fan of Hulu's The Handmaid's Tale, Serena Joy is clearly modeled after Schlafly. 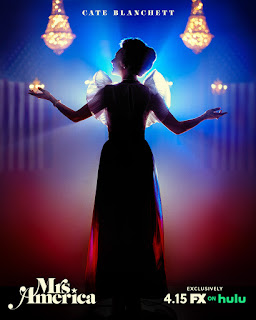 But the series also follows Gloria Steinem, Bella Abzug, Shirley Chisholm, and Betty Friedan in their efforts to push the women's liberation movement forward. Looking back, both Schlafly and the feminists had a huge influence on the women's rights movement. Even though the ERA was not ratified until 2020 (with my home state of Virginia being the 38th state to ratify the amendment) and still isn't enshrined in our Constitution, we have made great strides. We have a lonnnnng way to go, though, and conservative presidents such as Reagan, Bushes Sr. and Jr., and Trump have pushed back our progress.

Mrs. America is an almost perfect show. It fails to honor the full extent to which black and brown women, as well as queer women, contributed to the women's liberation movement. There is an episode dedicated to Shirley Chisholm (played wonderfully by Uzo Aduba), but all the other episodes focus on the white, straight women involved. I've read some criticism that suggests it goes easy Phyllis Schlafly, but I didn't see that. I think it shows her for the conniving, "want to have my cake and eat it too" woman she was. True, it portrays her as human with imperfections, motivations, and strengths. But most people who fall on the wrong side of history were not monsters--they were all too human.

Sinister is a bad horror movie that came out in 2012. I watched it with a fellow horror-lover using Netflix Party, which is the only way to watch it because we tore it to shreds. Ethan Hawke plays Ellison Oswalt (I'm assuming the scriptwriter likes Patton Oswalt and Harlan Ellison), a true crime writer who hasn't had a bestselling book in a decade. He moves his family into a *murder house*, where an entire family--except for one daughter--was killed by hanging. Ellison doesn't tell his wife he is moving them into a murder house because he obviously doesn't respect her.

He discovers a box of film reels and a projector in the attic. As he watches them, he realizes they are essentially snuff films showing the murder of other families. After doing some digging, he realizes that all of these families were killed, leaving one child behind who went missing. He also discovers that the Stevensons (the family that was hanged) used to live in the house of one of the other murdered families.

So, it's pretty clear at this point that each family lived in the house of the previous murdered family, and there is some sort of being or curse following the families who move into the murder homes of the other families. So, in short, Ellison fucked his own family over: they now carry the curse.

I won't tell you what happens, but I will say that this movie is so full of cliches, it's bursting at the seams. It has: an alcoholic writer who wears oversize, knitted sweaters and lies to his wife; an older cop who tries to warn the family from moving in; a professor of the occult who tries to explain the weird symbology in the films to Ellison; and a young, annoying cop who ends up cracking the code and telling Ellison his family is the next set of victims for this curse. As my friend said "Are we watching a movie about a movie?" and "Is this movie fucking with us"? Sadly, it was not fucking with us...it was just a bad, cliched movie. Feel free to skip, or watch while mocking.

Little Children is a movie I saw many years ago and recently rewatched. Based on the novel by Tom Perrotta, it's about suburban ennui. Kate Winslet plays Sarah, a stay-at-home mom who clearly regrets her choices and resents her daughter and philandering husband. She meets Brad (Patrick Wilson), a stay-at-home dad whom the other moms on the playground dub "the Prom King". Brad and Sarah begin an affair. 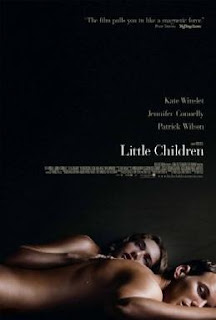 Meanwhile, a sexual offender, Ronnie McGorvey (Jackie Earle Haley, excellent in this difficult role), moves back in with his mother after serving time for indecent exposure. Ronnie provides a convenient scapegoat for the neighborhood and in particular, Larry Hedges (Noah Emmerich), a washed up former cop who is looking for someone to hurt.

Fans of Perrotta's novels will enjoy this film, with its moral ambiguity and simultaneous empathy and disgust for the human condition. That's kind of Perrotta's jam: his books are filled with unlikable, but highly empathetic characters. Little Children is the kind of film that asks you to feel bad for a pedophile while still knowing he's sick and a danger to society. If you're not a fan of movies that live in the gray area, this isn't the one for you.

Here's another movie--a classic, in fact--that I rewatched. It's very appropriate for These Strange Times (tm) since it's about a man living the same day over and over, which is what like feels like right now.

If you haven't seen Groundhog Day, what are you even doing? Just go watch it. The only reason I'm not giving it an "A" is that it isn't quite as funny as I remembered it being when I was a kid. But the grade is sort of irrelevant here. It's Groundhog Day and it is required watching.

And yet another movie I felt compelled to rewatch. Good Will Hunting is what I call an "autumnal" film. It's set in/around a college, the color palate is filled with browns and beiges, and it feels as comfortable and familiar as an old, unraveling sweater. Elsewhere, I've referred to it as similar to mashed potatoes: warm, comforting, and hella white.

Probably everyone knows the plot: Matt Damon is Will Hunting, a 20 year old janitor from south Boston who grew up in foster care. He's also a genius. Like, the type who can solve impossible equations and also has a photographic memory. Stellan Skarsgard is Gerald Lambeau, a math professor at Harvard who realizes Will's genius and, as a condition of not serving jail time for attacking a cop, has Will agree to study mathematics under his tutelage and see a counselor. 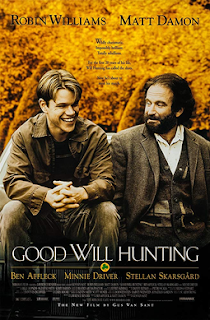 The only counselor who is able to deal with Will's bullshit is Sean Maguire (Robin Williams, excellent except for his non-existent Boston accent), a warm, understanding therapist who has issues of his own. He was also Lambeau's college roommate and is someone Lambeau looks down on because he didn't live up to his potential.

So, these two men basically go to war for Will's talent and soul: Maguire wants Will to choose the life he will lead and knows that forcing him into a box will push him away; Lambeau wants to essentially require Will to use his considerable talents in a high-paying government job. He is sickened at the idea of Will "wasting his talent" and being told "failure is an option". This is a tough movie for anyone with "Tiger parents" to watch. Hell, I felt some old resentment towards my parents rising up as I watched it and, overall, I have a good relationship with them.

Other than the fact that this movie is nearly 100% male and white, Good Will Hunting holds up relatively well. It's a bit cliche and over-the-top, but it still works well as a comfort food movie. And the soundtrack, featuring many songs by Elliot Smith, is bitchin'.

Posted by Damn Good Coffee at 7:11 AM