Director Albert Serra's Liberté is literally a 2+ hour film in which a group of libertines who have been cast out from the court of Louis XVI spend the night fucking in the woods. Reviews have fallen on two sides when it comes to this film: "provocative", "visionary", "the most explicit film ever made about the 18th century" OR "boring", "miserable", "pedestrian". I fall on the latter side of the camp: Liberté is boring as fuck. 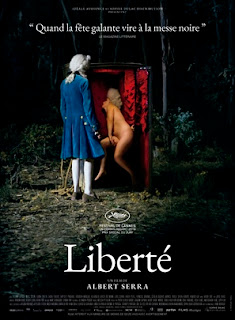 Not only is there no plot, no character development, and minimal dialogue, the sex isn't even all that radical or explicit. I've seen more action in a stag film from the 1920s. There are plenty of dicks, but they're all flaccid and then men in this movie are ugly as sin (the women are gorgeous, of course). In a way, this film is truly a work of the Marquis de Sade come to life in that it's basically just disgusting and not titillating in the slightest (and I'm not judging. I have nothing against explicit sex or violence in films...but I loathe being bored by a movie).

As a small mercy, most of sex appears to be consensual, even the violent shit. There are discussions of raping animals (yep) and kidnapping women from convents and "making them feel Christ's abandonment" through sex, but thank god the stuff we see on screen (and it's hard to tell if the actors are really having sex or just simulating it) is punctured with verbal consent.

I do not recommend Liberté except to film buffs like me who are extremely curious. I can recommend 10 sexier films off the top of my head if you're looking for a thrill. Liberté is empty, soulless, boring, and a waste of time.

Behind the Burly Q

This 2010 documentary directed by Leslie Zemeckis (wife of Robert Zemeckis), looks at the "Golden Age" of burlesque, from about the 30s through the 50s. Stars of burlesque, such as Tempest Storm, April March, Dixie Evans, and Blaze Starr are interviewed, as are spouses and children of burlesque performers (including musicians and comedians). 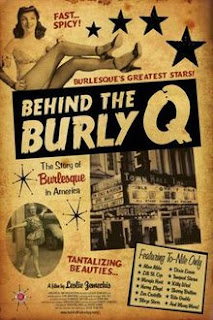 While this is all very interesting, this is very much a white and Euro-centered look at burlesque. There is literally one mention of a black burlesque troupe, which is dismissed as "it didn't last long" and a few details about female impersonators. This really annoyed me because even if there weren't many burlesquers of color during the golden age of burlesque (big if), the art form  borrowed (stole) from non-white, non-western cultures, which rarely get their due. Plus, you have folks like Josephine Baker who most definitely contributed to the art of erotic dancing. I mean, Baker's banana skirt act is more famous than any golden age burlesque act I know of!

So, while this is a fine and interesting doc, it is sorely lacking. It also relies heavily on personal anecdotes and feels a bit all over the place. I did appreciate the inclusion of comedians and musicians, in addition to dancers, as these folks played a huge role in early burlesque shows.

Oh, Hello is not, strictly speaking, a movie. It's a recorded broadway show starring John Mulaney and Nick Kroll, who play septuagenarians George St. Geegland and Gil Faizon. Friends, roommates for 40 years in a rent-controlled Brooklyn apartment, and aspiring artists (George is a novelist and Gil an actor), the two men bicker, banter, and share a love of tuna fish and pronouncing words incorrectly. 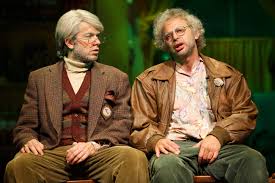 If anyone ever asks "do white people have 'culture'"?, show them Oh, Hello. It's the whitest fucking thing I've seen in ages. It even includes famous white people Steve Martin and Matthew Broderick as guest stars!

I had heard that this neo-noir crime movie starring Brad Pitt was an exceptionally good film, but for some reason it was never at the top of my to-watch list. Well, I went ahead and watched it and it is a gritty, funny, violent delight. Not as epic as The Departed, but much more funny and irreverent, Killing The Softly is the kind of film that sucks you in and makes you forget time is passing (my favorite kind of film). 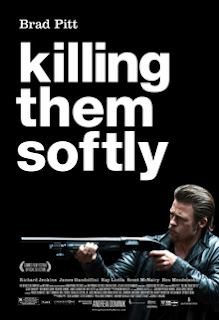 After two dim-witted criminals, Frankie (Scoot McNairy) and Russell (Ben Mendelsohn), hold up a mafia poker game, Jackie Cogan (Brad Pitt), a well-respected hitman, is called in to take out the men responsible. Cogan knows Johnny Amato, the mob guy who hired Frankie and Russell, and he has a rule about killing people he knows because "they beg, they piss themselves, they call for their mothers...it get embarrassing". Cogan prefers to "kill them softly"--quickly, from a distance, and with no time for emotions to enter the picture. So Cogan brings in another hit man, Mickey (James Gandolfini in one of his final roles) to take out Amato. Unfortunately, Mickey is more interested in fucking sex workers and drinking all day, so it's up to Cogan to take everyone out himself.

Killing Them Softly is just plain entertaining, especially if you like mafia movies. Ray Liotta is exceptionally good as Markie Trattman, the guy who runs the poker game and who ends up being quite a tragic figure in the film.

1963's Blood Feast is considered to be the first splatter/gore movie. Directed by the infamous Herschel Gordon Lewis, the film actually has a somewhat interesting plot. Dorothy Fremont is planning a party for her adult daughter, Suzette. She wants something unique, so she visits "Ramses Catering" run by Fuad Ramses (Mal Arnold). He suggests an Egyptian Feast, which Mrs. Fremont gets excited about because Suzette loves Egyptian culture. 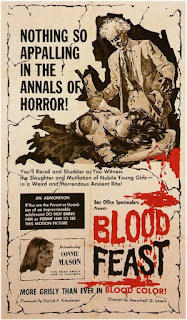 Unbeknownst to Mrs. Fremont, Fuad Ramses is a fucking psychopath who has been killing young women and taking their body parts. He is collecting the body parts of young women to serve in a feast dedicated to Ishtar, the Egyptian goddess of war. So Mrs. Fremont has accidentally ordered a cannibalistic feast. Meanwhile, the cops are trying to figure out who is going around killing women and taking their tongues, brains, and limbs as souvenirs.

Blood Feast is a bad movie. As in, poorly made. The acting is ATROCIOUS. It's almost as if the actors were given to directions to act poorly on purpose. However, Blood Feast will forever have its place in this history books since the gore was so extreme when the movie first came out. In today's world, it's PG-13. The blood is all fire-engine red and clearly looks like red paint. The most gruesome scene is when Ramses pulls out a young woman's tongue, which I gotta say made me flinch a little bit. So, it's a bad movie, but you gotta respect what it was going for. Only recommended to horror aficionados.