If you're a movie lover, by now you've either heard about or seen Bong Joon-ho's masterpiece, Parasite. The film lives up to the hype: it is funny, shocking, devastating, and thrilling. When I first saw the poster and title, I assumed it was a straight-up horror film. However, Parasite is more of a social horror film: it is a film about the lengths desperate people will go to take care of their needs.

The movie opens on the Kim family: father Ki-taek (Song Kang-ho, a regular in Bong Joon-ho's movies), mother Chung-sook (Chang Hyae-jin), daughter Ki-jeong (Park So-dam), and son Ki-woo (Choi Woo-shik). The family lives in a semi-basement in the poor part of town. They struggle to find work, resorting to doing menial tasks like folding pizza boxes to earn just enough to get through each day. However, they are clever and resourceful. When Min-hyuk, Ki-woo's friend who attends college, says he will recommend Ki-woo as an English tutor for the daughter of a rich family he knows, things start looking up for the Kim family.

Ki-woo shows up at the Park family's enormous, modern home and is shocked by their lifestyle. Mom Yeon-gyo (Cho Yeo-jeong) is a "simple" woman: a stay-at-home wife who is very naive. She is impressed with how confident Ki-woo is when he tutors her daughter, Da-hye (Jeong Ji-su) and confides in him that she believes her young son,  Da-song (Jung Hyeon-jun), might be an artistic genius. It just so happens that Ki-woo knows a very talented--and very expensive--art teacher (his sister, though he doesn't tell Mrs. Park this).

After Ki-woo and Ki-jeong have infiltrated the Park family, Dad is next. The Kim family hatches a plan to get Mr. Park's (Lee Sun-kyun) chauffeur fired and then "recommend" Mr. Kim, all the while not letting the Park family see that the whole Kim family is becoming employed by them. The most dangerous and crafty move is getting the Park's loyal housekeeper fired and Mrs. Kim hired in her place. But once they accomplish this, the entire Kim family is living the high life as well-paid employees of the wealthy Park family. Hence the title. 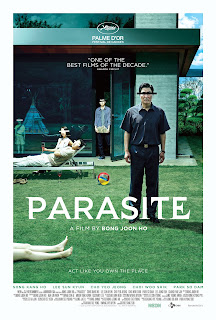 Of course, things don't go as planned. A huge surprise is in store for both the Kims and the audience partway through the movie that makes the game they've decided to play extremely dangerous. And the movie fires on all cylinders from the moment the twist occurs until the end of the film. It's a nail-biting rollercoaster ride where you don't really know who to root for. I would say that, overall, Bong Joon-ho encourages the audience to empathize with the Kim family. They are the center of the story and not only are they poor at the start of the movie, they face additional losses throughout. But the director is careful to acknowledge that in their quest to scam the Park family, they end up hurting others who are suffering worse than themselves.

Bong Joon-ho also directed 2013's Snowpiercer, another class warfare fable. But unlike Snowpiercer, Parasite is more subtle (and more realistic, seeing as it's set in reality and not on a train that houses all of humanity and travels endlessly around the frozen planet). The concepts remain the same: rich people just have so much. So much stuff, so much space, so much food, so much help. Whereas poor people literally have to beg, borrow, and steal to survive. But this is a systemic problem and individuals, while they may not be innocent, are certainly not 100% to blame. The Park family isn't doing anything *wrong* by being rich and, in fact, the film suggests that Mrs. Park in particular tries to be very generous. And they are taken advantage of, fooled, and tricked into letting their "help" go and hiring (unbeknownst to them) a whole family. And then, of course, there's the help--the chauffeur and housekeeper--who did nothing wrong except stand in the way of the Kim's ambitions.

So Parasite is one of those juicy films where, depending on how you look at it, there either are no bad guys or everyone is a bad guy in one way or another. Parasite will have you on the edge of your seat for the entirety of the film and be thinking about it long after you leave the theatre.