Oh, Cats. What can I say that hasn't already been said? It is known and accepted that Cats, the musical created by Andrew Lloyd Weber based on the poetry of T.S. Eliot is an embarrassing, yet mysteriously popular musical. Like Seinfeld, it is a show about nothing. Cats emerge and introduce themselves through song. One is chosen to go to the "Heaviside Layer" (heaven). End of show. How this show became one of the longest running on Broadway is something that will never be explained except that maybe people like cats? Even in the pre-Can Haz Cheezburger days, people liked to watch cats prowl around and be weird, I guess.

And so Tom Hooper brings this monstrosity to the silver screen. Cats is filled with talent: Ian McKellan, Judi Dench, Jennifer Hudson, Idris Elba, and even Taylor Swift play roles of the titular felines. Plus there are a bunch of no-names who are great dancers, such as Francesca Hayward as Victoria and Steven McRae as Shimbleshanks (these cats all have really dumb names, btw. It's kind of their thing). The dancing and singing is pretty good, overall. The acting, well...these seasoned veterans of stage and screen try their best, but there is only so much polishing a cat turd can stand. 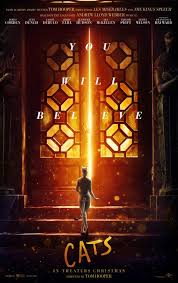 Ok, I'll level with you: Cats is kind of fun. It's a CGI nightmare in which the cats in question have human faces, human hands, human feet, and human butts...but fur (and no visible genitals). The scale makes no sense. These cats are simultaneously human-size to a mouse, but mouse-size to a human. Bustopher Jones (James Corden) is a fat cat at 25 pounds (or an "absolute unit" as my friend who saw the movie with me said), yet other cats appear to be kitten size in scale to everyday objects. Basically, whoever was in charge of the artistry of this movie didn't give a fuhhhhck.

But despite the insane CGI (or maybe because of it), Cats is enjoyable in a Star Wars Holiday Special kind of way: it's so bizarre and weird that it's fun. Now, not all of it is equally fun. For example, there are some songs ("The Moment of Happiness", "The Addressing of Cats", "Gus the Theatre Cat") are boring as shit, while precious few ("Mr. Mistoffeeles", "Bustopher Jones", "Shimbleshanks") are actually fun. Did you guys know that this really famous musical has really bad music? Even the award-winning song "Memory" kind of sucks if I'm honest. If it were my choice of who wins the Jellicle Ball or whatever the fuck it is, I'd give it to Mr. Mistoffelees because he has hands down the best song in the show.

Speaking of Mr. Mistoffelees, did you guys know that this is a magician nerd who (in this version of the story) gets the sexy girl (Victoria) in the end? I don't know how I feel about that. I kind of like Macavity (Idris Elba) the "bad" (but obviously sexier) cat who is also a magician but like an evil one.

Each cat has one attribute that is its personality: Victoria is the new girl, Mr. Mistoffelees is the nerd, Bustopher Jones is fat, Jennyanydots (Rebel Wilson) is also fat (I really related to her, not only because we share a name and are fat, but because if I were a cat I'd want to be a pampered-ass housecat), Macavity is evil, Rum Tug Tugger (Jason Derulo) is the cat that fucks, Old Deuteronomy (Judi Dench) is old, Shimbleshanks is gay as hell, etc. There's no real character building because with about 1,873 cats and only 2 hours, there's no time to commit to giving these cats three dimensions.

Overall, Cats is just...it's a lot. I saw a movie last year called Climax where a dance troupe accidentally drinks LSD-spiked punch and simultaneously goes batshit. Cats is basically the same movie. In fact, there's a scene where Taylor Swift (I refuse to reveal her cat-name...she is Taylor Swift) forcefully spikes the cats with cat-nip. Like I said: same. movie. If you want to watch a movie that you know, in your heart of hearts, would be WAY better if you're high as fuck, Cats is a good option.