The New Scottish Gentry: What's this? An ALBUM review!?

So, I decided to do something very different and review an album. I've been feeling very nostalgic lately and have taken a dive back into movies and music I loved in late high school and college (keep your eyes peeled for  retrospective reviews of Being John Malkovich and American Splendor soon). And, first of all, I had/have great taste. If I do say so myself. The shit I liked when I was 18-22 holds up. Good job, me *pats self on back*. But more importantly than my own good taste is the way these pieces of culture make me feel. Emotionally, intellectually, sexually, and aesthetically. And nothing taps into those intense feelings that only someone who is exiting childhood and entering adulthood can feel more than the post-punk, garage rock band Franz Ferdinand's self-titled debut album. 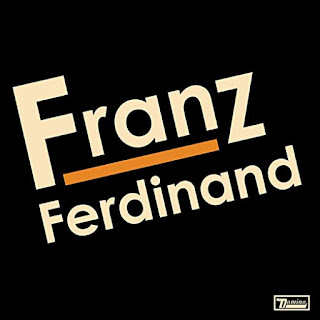 Clocking in at a tight 38 minutes and 49 seconds, with 11 tracks, Franz Ferdinand doesn't have a single wasted minute. Granted, there are a few songs on the album I care less for than others (I've never liked "This Fire", which is the song FF always closes out their concerts with), but even their worst song is better than the best song on plenty of other albums I own.

But why do I love this album, and this band--who many people barely remember--so much? Obviously, their music hits all the right pleasure centers in my brain. Not being a music aficionado, I don't really have the language to describe why I like what I like the way I have the language to describe movies I like, so excuse me if I flounder a bit. Franz Ferdinand's music is dark--but not metal-dark. Sexy-dark. Lead singer Alex Kapranos has the voice to match, and is able to go really deep on some of the songs and make it feel like he's seducing you in the back room of a really upscale, but still funky, club. Their music makes me think of velvet couches, heavy drapery, guys in eyeliner and skinny ties. The band's aesthetic choices in their album art and how they dress during performance is all part of the package, as are their occasionally homoerotic lyrics (see "Michael" below). They're like if 80s new wave and glam rock had a baby. And that baby was adopted by David Bowie and was best friends with Harry Styles.

Most average folks know the track "Take Me Out" from Franz Ferdinand since it was, and is, the band's biggest hit. And even though there are better songs on the album, it might be my favorite in terms of pure foot-stomping, ear candy joy. It's catchy, but not in an annoying way and after countless listens over the past decade and a half, I'm still not sick of it.

What would I consider the "best" song on the album? Probably "Dark of the Matinee", which contains my favorite lyrics in any song of any time:

I time every journey

To bump into you

I charm you and tell you

Of the boys I hate

All the girls I hate

All the words I hate

All the clothes I hate

How I'll never be

In fact, all the lyrics in "Dark of the Matinee" are great, as is the video.

And then there is "Michael". It's important to note that when I was a teenager and young adult, I was very into anything having to do with gay men. I mean, I still am, but it was a lot more potent back then because I was sexually inexperienced and so men were a scary and intriguing mystery to me. Therefore, gay men were the perfect group to attach my lust and fascination to since, hey, they didn't want anything to do with me so I was safe. This really isn't an unusual phenomena for young girls to experience. Just check out all the m/m fan fiction that teen girls write and read.

So, "Michael", which is a song about a man who finds himself entranced by another man on the dancefloor, was catnip to me. The lyrics contain the refrain "so come and dance with me" repeated over and over, and in live versions, Kapranos often substitutes "so come all over me" for the final refrain.

If "Take Me Out", "Dark of the Matinee", and "Michael" are my top three songs from the album, "Jacqueline", "Auf Asche",  and "Tell Her Tonight" would be my next tier. "Jacqueline" starts the album off on a melancholic note that transitions to straight up rock partway through the song. It's about an older man longing for a younger woman, and that woman just seeing him as a creepy old geezer. And speaking of longing, "Auf Asche", which contains lyrics such as--

You see her, you can't touch her

You hear her, you can't hold her

You want her, you can't have her

You want to, but she won't let you

--could easily come off as an incel anthem, but given that this was pre-incel, it just feels like good, old-fashioned longing to me. In fact, a lot of Franz Ferdinand's songs, in this album and others, capture the inherent tension of love and desire. "Tell Her Tonight" and "Cheating on You" are about, well, cheating. "Come on Home" ends with the lyric "so come on home, but don't forget to leave". And on their 2009 album Tonight, the song "Live Alone" is an ode to how familiarity can breed contempt in a relationship. I suppose if there is a single theme that pervades Franz Ferdinand's music, it's that love and relationships often inspire conflicting and ambiguous feelings. However, we shouldn't look too deeply into the messages behind the band's songs because, as Kapranos once said in an interview, the band's goal is "to make records that girls can dance to and cut through the postured crap".

...but some posturing is ok. It makes them look cool.

I think I just love this album so much because it makes me feel good. It's rocky and punky and sexy. It's easy to listen to over and over, and by now I know all the lyrics. The members of the original band--Alex Kapranos, Bob Hardy, Nick McCarthy, and Paul Thomson--are all good looking men who wore tight-fitting suits with skinny ties and had shaggy haircuts, as was the fashion at the time (mid-aughts. Think about The Strokes, The Hives, Interpol, et al). The album is at the intersection of deep and dark, and playful and fun--just like me at 18 and still today at 34. It speaks to me personally.

And I took their advice and never became anything I hate.