Sadly, I knew going into Antebellum that I wasn't likely to be impressed with it, given the very lukewarm reviews that I read ahead of time. Now having watched it, I can say that I think the movie blew the opportunity to be a better movie. I was left thinking "that's it?". It's not the worst movie, but it's just...meh.

There's really no way to explain what this movie is about and why it's lacking without revealing major plot spoilers, so if you want to go in with fresh eyes please stop reading now. Otherwise, onto the plot revelations!

Directed by Gerard Bush and Christopher Renz, Antebellum opens on a confederate plantation. The very first scene involves an enslaved woman being shot by the head overseer, Jasper (Jack Huston, best known for his role as Richard Harrow in Boardwalk Empire. This movie is definitely a step down for him). This plantation is especially strict with its enslaved people, who are prohibited from speaking unless spoken to, even amongst themselves. Janelle Monae plays Eden, the favorite slave of the man who appears to be the head of the plantation. He doesn't have a name and is referred to only as "him". Eden dreams of escaping but know that unless she waits for the right moment she will surely die. 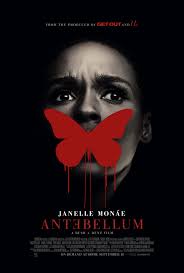 And then BOOM, we're suddenly in the present day! Monae plays Veronica Henley, a successful sociologist and public intellectual who has written a book about coping mechanisms Black women engage in to survive in the white patriarchy. She is also a wife and mother, though she feels guilt that her work takes her away from her daughter, Kennedi, for long periods of time.

Veronica is at a summit in Louisiana, leaving dinner with her friends Dawn (Gabourey Sidibe, easily the highlight of the movie) and Sarah (Lily Cowles) when she is kidnapped by Jasper and Elizabeth (Jena Malone, absolutely gnawing on each scene she's in with a ridiculous southern accent). If one has not already inferred, these people are all involved in some kind of super secret Civil War Reenactment camp which includes a plantation filled with Black people snatched out of their daily lives and forced into slavery. This was not a shocking twist to me, since I already knew about it going in, but if you pay attention to context clues even from the very beginning (one enslaved man calls the confederates "crazy fuckers", which I don't think was the typical parlance of the antebellum south) you can figure it out.

The movie then goes back to "Eden's" current life on the plantation. After a woman who is newly arrived at the plantation and looks up to Eden/Veronica kills herself, she decides that now is the time to escape. Conveniently, the man who rapes her every night has a cell phone (turns out, he's Senator Denton, up for reelection in Louisiana. Do I believe a senator from Louisiana would kidnap Black women and force them into slavery? Ab-so-lutely). Veronica and another man on the plantation, Eli, try to use his phone to escape, but Denton wakes up and kills Eli. Veronica manages to wound him, and drags him into the "burning shed" (where they cremate enslaved people who try to escape). She manages to get Jasper in there too and burns those white fuckheads alive. Hell yeah!

Of course, the final confrontation is between Veronica, now on horseback, and Elizabeth, whom it turns out is Senator Denton's daughter and is the most racist bitch alive. She dies too, and good riddance. Then, Veronica rides out of the reenactment camp to freedom. Cut to credits.

Ok, so here are my issues with the movie:

1) There's no explanation about how this secret plantation came to be and how so many people (one scene involves an entire battalion of "confederate soldiers" having dinner there) can keep it a secret, especially when you pair it with the fact that all these Black people who have been kidnapped have, you know, families and what not who would be looking for them. In 2020 racism hides in plain sight. That's why it's so insidious. We don't need secret plantations in order to keep racism alive. All we need are white people who do jack shit.

2) The end of the movie is anti-climatic and, honestly, not revenge-y enough. Say what you will about Quentin Tarantino, but the guy knows how to do a revenge movie. Antebellum is no Django Unchained. I wanted all these white assholes to SUFFER. They all died too quickly, in my book. I wanted Janelle Monae to cut some dicks off and pluck some eyeballs out. The whole escape scene is just too quick and too tidy. This is a horror movie, and I wanted horror.

3) The main problem is that the movie lingers over scenes of enslavement, including beatings and rapes. It's not the *most* violent movie (see Django, above) but it's just kind of like...why? I guess the real question is: how does this movie contribute to the discourse on race in horror films and/or cinema that looks at slavery? You might say, well, it doesn't. It's just entertainment! Hmm, some entertainment. If you're going to make a movie about enslavement and white violence on Black bodies, it better either 1) have something to say or 2) be a damn good movie. Antebellum is neither.

Antebellum argues that racism is alive and well in 2020, which is kind of like a movie being made about how water is wet. White people don't need to create a double-super-secret plantation in order to violate and torment Black people. All they need to do is call the police. Or vote for Trump (or, hell, Biden). I fear that this movie will make some white people say "well, gosh, at least I'm not THAT racist. I'm a *good* white person."

Overall: Antebellum is...fine? It's not good, it's not horrendously bad. It's just...*shrug emoji*. Definitely not worth paying $20 to rent, but more fool me I guess!