This Is The Zodiac Speaking: A Retrospective of David Fincher's Zodiac

I recently re-watched David Fincher's 2007 masterpiece, Zodiac, twice. Meaning, I re-watched it and then re-watched it again. And I realized that I've watched this movie about 10 or 11 times and have never reviewed it. The film, about the serial killer who named himself "Zodiac" in the late-60s through late 70s, is extremely compelling to me. It's a movie about research, obsession, and the torment only a cold case can cause.

Nearly everything about this film is perfect. From the top-notch performances from a number of actors in their prime--Jake Gyllenhaal, Robert Downey Jr., Mark Ruffalo, Chloe Sevigny, and John Carroll Lynch among others--to the funky and mellow soundtrack featuring hits of the time period (you'll never listen to Donavan's "Hurdy Gurdy Man" without thinking of this film once you've seen it), Zodiac is a finely tuned masterpiece. There's just no other word for this film. 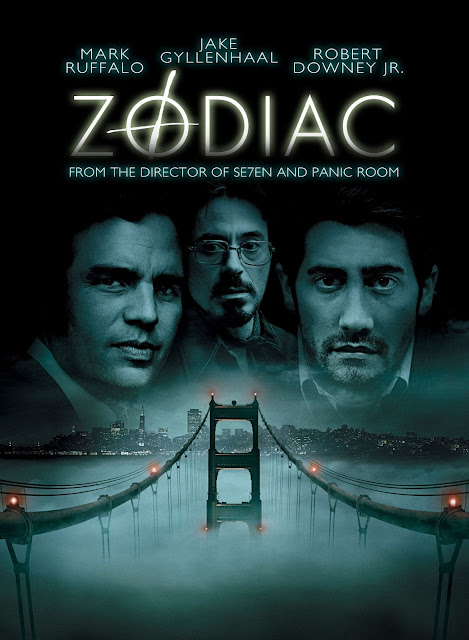 Gyllenhaal plays Robert Graysmith, a political cartoonist working at the San Francisco Chronicle (the film is based on the book he wrote about the Zodiac which was published in 1986). Graysmith sits in on a meeting of the editorial board after the Chronicle receives a letter from a person who claims to be the man who killed a couple, Darlene Ferrin and Michael Mageau, on July 4th 1969, as well as Betty Lou Jensen and Arthur Faraday on December 20th, 1968. The letter contains information the police never released to the public, as well as a part of a cipher and a demand that the Chronicle print the cipher or more lives will be taken.

Graysmith follows the investigation, which is assigned to Detective Dave Toschi (Mark Ruffalo) after the Zodiac takes credit for shooting a taxi driver within San Francisco's jurisdiction. Additionally, Graysmith pesters Paul Avery (Robert Downey Jr.), the crime reporter at the Chronicle, for updates and information. The first half of the film mostly focuses on the hunt for the Zodiac, which leads to dead end after dead end. The second half focuses on Graysmith's obsession with the case, leading him to play citizen detective and ultimately write a book about the case in which he posits that Arthur Leigh Allen (John Carroll Lynch) was the Zodiac, even though all the evidence tying Allen to the murders were circumstantial. Graysmith's wife (played by Chloe Sevigny) left him due to his intense fixation on solving the case.

Zodiac is a perfect blend of creepiness and looming dread without gratuitous violence, wry humor, and brain candy (lots of searching in archives and trips to the library). It's a very Ficherian film: dark, gripping, compelling, and compulsively rewatchable. Looking at Fincher's filmography, I realize that he is one of my all-time favorite directors. His films Gone Girl, Se7en, The Girl With the Dragon Tattoo, and his TV show Mindhunter are all works of art I've watched multiple times and introduced to others. I like dark movies, but especially if they are also smart movies and Fincher hits the nail on the head.

Zodiac was never the most prolific or most violent serial killer, but his cat-and-mouse games with the cops and newspapers make him memorable. If you're a true crime buff or a movie buff, this is one film you don't want to miss.