Strap You Hands 'Cross These Engines

Movies: Blinded by the Light

In 2002, Gurinder Chadha directed Bend It Like Beckham, which became an arthouse hit. Audiences loved the comedy to be found in an Indian girl living in the UK and straddling both the traditional world of her Asian parents and the modern world of her English peers. By the end of the film, her strict parents have come to understand and admire Jess's (Parminder Nagra) talent on the soccer field and Jess, in turn, has a new level of respect for her hand-working parents.

Blinded by the Light, also directed by Chadha, follows nearly the exact same formula, with sadly diminishing returns. The film follow Javed (Viveik Kalra), a 16 year old Pakistani kid living 1987 Britain. Javed loves to write, especially poetry, but his super old-school dad finds no value in writing. He expects Javed to work and hand over his wages (the backdrop of Margaret Thatcher's recession-plagued Britain is one of the best aspects of the film) to help support the family, and also prepare to enter college--not to follow his passions, but so that he can get a good job and eventually marry (a woman his father will choose, naturally).

Like Jess, Javed is stuck between two worlds. His English peers try hard to get him to rebel a little: they invite him to parties and encourage his writing. But Javed is, generally speaking, a meek and obedient young man. That is, until his Sikh buddy from school gets him turned on to the Boss.

Hearing the music of Bruce Springsteen for the first time is no less than a revelation for Javed. Springsteen's music, which is basically about "getting out this dump", speaks to him in a way nothing else has before. It's not long before he becomes obsessed. 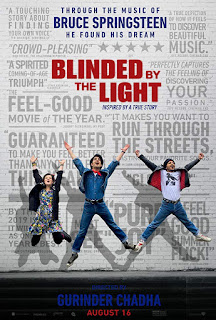 On the one hand, Javed's newfound passion ignites his writing, gives him the courage to ask out a girl in his class, and lets him push back against his father's strict rules. On the other hand, Javed becomes kind of a dick. He makes fun of his best friend from childhood for listening to synth music, demands that an article about his love of the Boss be published in the school newspaper, and even leaves in the middle of his sister's wedding celebration to buy tix to see Springsteen.


But by the end of the movie, all is well--he wins a prize for his Springsteen essay and his parents come to see him read it and he ends up improvising a little speech about how Springsteen and his dad would get each other--they both came from poor backgrounds and worked hard to succeed. Javed makes up with his friend, gets into the college program of his choice (for writing, NOT economics as his dad prefers), and has a new level of respect for his hard-working parents.

Sounds familiar, right? Blinded by the Light almost feels like Chadha plagiarized her own work--even down to a pivotal scene that takes place during a character's sister's wedding. Both Jess and Javed's parents are pretty two-dimensional: they are strict, no-nonsense first generation immigrants who have secret hearts of gold underneath their old-school exteriors.

Blinded by the Light feels like a movie the should have come out 15 years ago. There's even a throwaway line about how people in America are less racist/more open to different cultures than Britain than made me chuckle darkly. The optimism in the film feels practically naive. Granted, it's a PG-13, family-friendly film. It's a safe, comforting popcorn movie where *hard work* actually gets you where you want to go. But to me, it felt too by-the-numbers.

My mom loves Bruce Springsteen, and fans of his music will greatly appreciate the film (which is inspired by a true story, by the way. There are pics of the real Javed with Springsteen at the end). There are definitely some joyous moments, as when Javed, Roops--Javed's Springsteen-obsessed pal, and Eliza--Javed's girlfriend, run through the town singing "Born to Run". "Born to Run" is a fucking great song. But it's not enough to save the movie from its cheesy, cringe-y moments.

Overall, imma give Blinded by the Light a B-. It's not a bad movie, and it definitely tugs your heart strings. But it feels so similar to Chadha's previous (and better) work that there is a touch of disappointment in how predictable it is. Families, those looking for a comforting, happy flick, and fans of the Boss will likely enjoy it more than I did.