When a Man Negs a Woman

Joanna Hogg's coming-of-age drama The Souvenir is a strange, quiet movie. I saw the preview some months ago and was intrigued even though I couldn't figure out what the movie was supposed to be about other than a tumultuous relationship between a young man and woman.

And it is about that, albeit with a twist (which will be revealed below, so spoiler alert). But it is also about a young woman, Julie (Honor Swinton Byrne--Tilda Swinton's daughter), who is emerging from a cocoon of privilege and severe naivete´ and blossoming into an artist.

The time period of The Souvenir is the early 1980s in England. Julie is in film school and being supported by her rich parents (real-life mom Tilda Swinton plays Julie's mom). She meets Anthony (Tom Burke) at a party and the two start meeting regularly for lunch and champagne. Anthony is the ultimate rich, arrogant preppie. He wears Tucker Carlson bowties and slyly undermines Julie's ambitions and opinions. But he hides a pretty intense secret of his own. 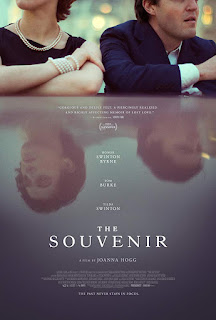 During a dinner at home with a pair of mutual friends, when Anthony is in another room, Julie's friend casually calls Anthony a "habitual heroin user" as he is puzzling out how Julie and Anthony know each other. Julie is struck silent, and this revelation informs the rest of the events of the movie, especially when Julie comes home to find all of her jewelry and film equipment missing and Anthony claiming that they were robbed. Her willingness to believe him is both cringeworthy and understandable. A 24 year old girl in love is going to hard-pressed to believe that not only would her boyfriend steal all her shit to feed his drug habit, but that he would do so and then lie so blatantly to her, as if she's that stupid. It's almost less insulting to her intelligence to believe him.

And so The Souvenir goes. Anthony acts like an ass while denying his drug problem, then can't hide it, then disappears, then reappears claiming he is fine, then relapses. All while Julie is puzzling out film school and what filmmaking means to her.

Words I could use to describe this film are "frustrating", "insufferable", "pretentious", "repetitive", and "boring". But despite its difficulties and almost stubborn unwillingness to be a likable or accessible film, I admired it because it was honest about how relationships really work. It's also honest about the human ability to lie to ourselves and others. Julie isn't foolish and she isn't weak, she's simply inexperienced. And because of that inexperience, she lets herself be influenced by a man who is arrogant and attractive in his arrogance. I have been Julie. I have been a young woman who is attracted to art, beauty, and arrogant men. Haven't we all been Julie, to some degree or another?

The inevitable conclusion of The Souvenir is almost annoying in it's clean resolution. Julie is free of Anthony and able to fully pursue her work, all the more wise for having had a borderline emotionally abusive relationship. And while that is what I wanted for her character, it's too neat a resolution for all the messiness and pent-up emotions that came before it. The Souvenir might be the most British film I've ever watched: despite everything--the drugs, the stealing, the sex, the fights--there is never truly an explosion of emotions. Maybe that's one benefit American have over the English: we're willing to scream and cry when it is warranted.

The Souvenir is like a museum: beautiful, curated, clean, elegant, and ultimately cold and frictionless. It's an imperfect, yet poignant film that feels like it only scratches the surface of a more interesting film lying underneath.